Powered by the Torqeedo Deep Blue 50i electric outboard motor, the boat sails above water, its weight resting on two hydrofoils. The vessel has a top speed of 55 km / h and a range of 92 km when driven at 37 km / h.

The development of the Candela Seven was piloted by the CEO of Candela Speed ​​Boat, Gustav Hasselskog, who wanted to know if it was possible to combine modern electric motors with the hydrofoils which are now standard equipment in many sailboat races. competition.

A leader in electric drives for personal watercraft up to 120 feet, Torqeedo was founded to solve similar problems. “Even though we have grown a lot since then,” Plieninger says, “we have retained our start-up culture. We like to solve problems and do things differently.

The Candela Seven is 7.7 meters long and can accommodate six people. Its Deep Blue electric motor smoothly accelerates the boat until the ship reaches 27 km when it comes out of the water on its hydrofoils. “Energy consumption drops by 80% in hydrofoil mode, which gives us a range similar to that of a gasoline engine,” explains Hasselskog. The boat is said to run very well on its hydrofoils without slamming in the waves and without noise. 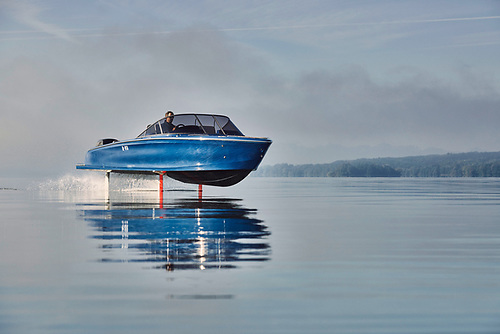 Candela has also developed a “flight control” system with several sensors that provide her with GPS, sonar and engine data. The system then mechanically adjusts the main and rear foils on the fly. This is designed to keep the boat stable in strong waves or when making tight turns. And if you’re traveling in shallow water, the hydrofoils retract by pressing the touchscreen.