The 1.5 meter unmanned mini-sailboat called ‘Seoltóir Na Gaillimhe – the Galway Sailor’, which was deployed in June, was recently found stranded on Bunes Beach above the Arctic Circle in the Lofoten Islands , in Norway.

After traveling over 3,000 km from Irish Atlantic waters to Norway, the ‘Seoltóir Na Gaillimhe – the Sailor of Galway’ was found by family and friends of Bjørnsen while vacationing on the island. Lofoten over the summer, the Marine Institute’s Explorer Education Program reported.

Mr Lars Bjørnsen said his daughters were delighted to discover the mini-boat stranded on secluded Bunes beach, “our neighbor had found the boat and my three daughters were so excited to join him to open the boat’s hatch for see the Irish messages and “treasures” inside. We were able to read most of the letters written by students at Kilglass National School in Galway, although some were a bit wet. The girls were also delighted with the Irish sweets and crisps – which survived the trip. ”

“Bunes Beach is quite secluded on the west side of Reinefjorden on Moskenesøya Island, Norway. You can only get there by ferry and then have to walk 3 km to the beach. It is a beautiful beach in a bay surrounded by mountains and steep ridges. However, few people go there regularly. Therefore, the fact that we found the Galway Sailor mini-boat, which made its way into the bay and then washed up on shore with little structural damage is incredible for such a small boat, ”explained Mr. Bjørnsen.

Bjørnsen’s family and friends discover treasures inside the mini-boat “Seoltóir Na Gaillimhe – The Sailor of Galway”, after discovering it stranded on Bunes Beach above the Arctic Circle in the islands Lofoten, Norway. Photography: M. Lars Bjørnsen

The ‘Seoltóir Na Gaillimhe – the Galway Sailor’ is a 1.5 meter unmanned mini-sailboat that was supplied to the Kilglass National School in County Galway, as part of a collaborative, coordinated school project through the Marine Institute’s Explorer Education Program and supported by the International Educational Program Passages in the USA. The project was also funded by the European project Interreg iFADO (Innovation in the Framework of the Atlantic Deep Ocean), of which the Marine Institute is a partner. 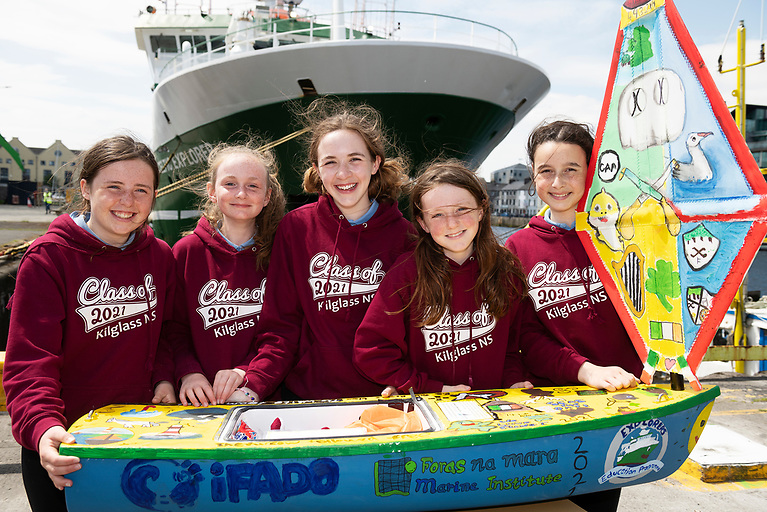 “Seoltóir Na Gaillimhe – the Galway Sailor” was delivered to the RV Celtic Explorer by the National School in Kilglass, for the first part of its voyage, to the Atlantic Ocean for deployment in June. Photo: Andrew Downes

Welcoming the news of the discovery of the boat, Mick Gillooly, Acting CEO, said: “The Explorers mini-boat project is a great example of marine science literacy and community engagement at the level of the sea. a local school in Ireland as well as across the ocean in For schoolchildren, this project offers an exciting way to see real-life examples of how the ocean influences all of our lives, how it connects us, as well than to learn how the ocean influences our weather and climate, and the types of technologies used at sea. The Marine Institute is delighted to have participated in this project and is pleased to support this collaboration involving the program team. Explorer Education, the Kilglass National School, the Marine Institute’s Research Infrastructure Team, as well as Passages to the USA with the mini-boat adventures underway.

The mini-boat was fitted with a sail and satellite tracker, which allowed Kilglass NS students to track it as it crossed the ocean, using the international Educational Passages tracking system. Mr Peter Kane, who was the head teacher of the project at Kilglass National School in Ahascragh, County Galway, was delighted with the news from Norway and thanked the Bjørnsen family for their lovely message to the schoolchildren from Galway. “It really is a mini summer miracle! Everyone at the Kilglass National School is delighted to hear that our mini-boat ‘Seoltóir na Gaillimhe’ was found in Norway. When the mini-boats are found after their trip, it highlights how the ocean connects us all ”.

The Explorer Education Program’s Marine Project involved more than 100 children participating in scientific, geographic and artistic activities to discover the ocean; as well as to prepare the mini boat for its trip. Students painted and decorated the boat, created artwork and good luck messages, and named the boat “Seoltóir Na Gaillimhe – The Sailor of Galway,” which recognizes the tradition of fishing in Galway. The mini-boat was launched by the Marine Institute’s RV Celtic Explorer near data buoy M6 in the Atlantic Ocean during a scientific survey in June.

Peter Kane also commented on the collaboration with the Marine Institute’s Explorer Education Program, highlighting the importance of marine themes used in the school curriculum in Ireland. “The Educational Passages mini-boat program brings children, schools and countries together in so many different ways, from building boats, tracking them at sea, to finding them in new countries when they reach land. . “

“When the ‘Seoltóir Na Gaillimhe – the Galway Sailor’ last reported its GPS position near the Faroe Islands in June, we weren’t sure if the boat had been damaged or if it was still drifting with the currents and winds. We were therefore delighted to receive a call from Cassie at Educational Passages to let us know that “Seoltóir Na Gaillimhe – the sailor from Galway” has returned ashore in Norway, “said Mr. Kane.

Ocean modellers at the Marine Institute have since provided a map showing the likely voyage of the “Seoltóir Na Gaillimhe – the Galway Sailor” after losing its GPS tracking signal. Knowing the latest coordinates, as well as where the boat was found, the team was able to produce a map showing the likely movements of the boats based on the currents and wind direction at the time. It has been estimated that the boat has traveled more than 3,000 km since its deployment in the Atlantic.

Marine Institute tracking map showing the probable journey the “Seoltóir Na Gaillimhe – the sailor from Galway” traveled, after the loss of the GPS signal, using OpenDrift, a particle tracking model, which predicts the path followed by the boat depending on the combination effect of sea currents and atmospheric winds.

Mr. Kane added, “We were also delighted to hear that our boat had also set a new record for the northernmost trip ever made by one of the unmanned mini-boats with educational passages. We now look forward to the next step of working with the Explorer Education Program and connecting our students with the local Norwegian Primary School, which has taken on the next new boat adventure. 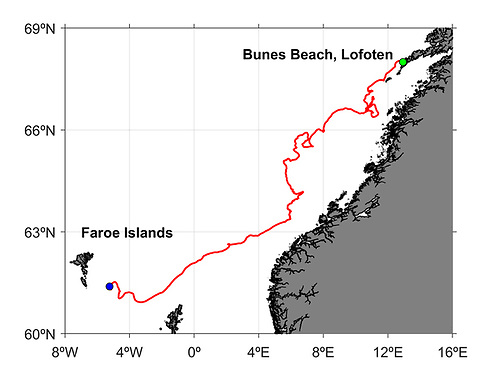 Educational Passages Map showing the tracking of the “Seoltóir Na Gaillimhe – The Sailor of Galway” since its deployment in the Atlantic from the RV Celtic Explorer. 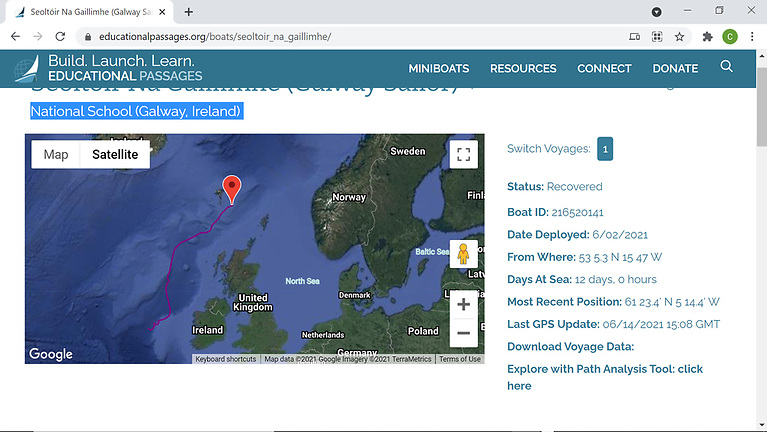 Engaging in the Educational Passages mini-boat program, the iFADO research consortium is launching a total of five mini-boats around the Atlantic this year from Ireland, Portugal, Spain, France and the United Kingdom. -United.

The Explorer Education Program is funded by the Marine Institute, Ireland’s state agency for marine research and development.